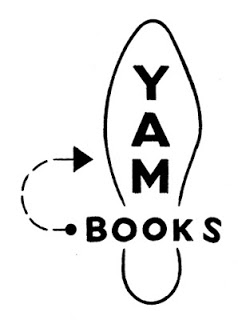 
Oakland, CA May 8, 2012 – The cold, stark winter months are now past, and with spring’s arrival we celebrate the bloom of Yam Books, Bay Area–based small-press publisher of art books and comics. Stemming from a deep-rooted desire to see more work by inspiring and visionary creators, Yam Books’ mission is to showcase a rich cornucopia of art and comics just waiting to burst forth.

Yam Books will be releasing two exciting projects this year.

Tim Hensley’s Ticket Stub collects all 9 issues of the critically-acclaimed cartoonist’s zine series of the same name. During his stint in the nineties as a closed-caption editor, typing subtitles for movies and broadcast television, Tim cued up his favorite scenes and drew them into his sketchbook. Films and TV shows wildly varying in both genre and quality (ranging from Butterfield Eight to Big Momma’s House) are subjected to Tim’s unique comic treatment. Mixing stark, powerful imagery with his distinct play on language, each page is dense with the Wally Gropius creator’s crisp, trademark linework. All of these issues together in one collection are truly a feast for the eyes!
Ticket Stub
By Tim Hensley
128 pages/softcover
ISBN: 978-0-9854138-0-4

Yam Books is very happy and honored to be working with Lark and Tim on both of these great projects. More information on both books will follow closer to their release date.
For more information on Yam Books, go to http://yambooks.com or email Rina Ayuyang at info@yambooks.com.