Motivated by the comics experience I had in The Burgh, I was excited to be traveling to Canada to exhibit at the Toronto Comics Arts Fetival. After a scary flight in a plane that had propellers, I joined my non-comics friend Annie who would be touring the city while I “slaved” away at the show. The weather was brisk and drizzly. It reminded me of a rainy day on Montmartre. I bought an umbrella at the drug store in the subway, and we strolled to a great nearby Italian restaurant, Cafe Nervosa. Anyway, we tried to walk off our dinner by touring the University of Toronto/Trinity College campus. I am always in love with gothic architecture as Annie models below.

That night, I attended the Dan Clowes event at the Toronto Public library (TPL). There was a huge crowd of young and old, very excited and stylish fans. Lots of people with glasses, including me. I was finally happy to get some wi-fi to access important business documents like Facebook and Gmail Chat. I realized that during the Q&A, a lot of people were staring at me, but I realized it was only because I was in front of this:

It was a great Q&A session. It was nice to hear about Clowes’ progression from his very early work in Cracked magazine to his new book, “Wilson.” I read an advance copy on the drive home from Stumptown the month before and it really made me happy. There are so many layers of narrative going on in there. I was kind of sad to hear that he won’t be doing anymore Eightball issues, only because of nostalgia reasons I suppose, because of course it’ll always be exciting to see any work by Dan Clowes in whatever format. It was also fun to hear that he’s working on a movie with Michel Gondry and his son.

During the Q&A, there was torrential downpour which lasted through the night, even the CN Tower was struck by lightning. So I headed out really early the next day to set up the Sparkplug booth.

Here is what I like to call Sparkplug Comic Books Express because if you’ve ever seen Dylan Williams and Sparkplug at other shows, you will see that he has massive amounts of minicomics and graphic novels at his table. It’s kind of insane, really. It was fun talking to people about the books Sparkplug carries. Many of the attendees were interested in Sparkplug’s art comics offerings. It was pretty hard for me to get away from the table, but managed to talk to a variety of people, bookbinders, bookstore owners, novelists, zinesters.. at one point there was this man scolding me for not having a central female superhero in my book so that I could break into the movie business. That was a fun debate! Also, I got to meet Andy Brown from Conundrum Press who published “Guilded Lilies” one of my favorite books by Jillian Tamaki. Also, Alan Hunt, who is a fan of The Comix Claptrap, the comics podcast that Thien Pham and I co-host, came over and reassured me that he’s not as annoyed by us as I thought he was.

Sparkplug was set up in the Publishers Pavillion, a conference room shared by the likes of Fantagraphics, Brett Warnock for Top Shelf, and Dan Nadel of Picturebox. I was sequestered in the corner, but managed to sell a good amount of stuff and got a lot of traffic considering that we were separated from the main hall which was packed to the gills. At one point the room smelled like spoiled food in a refrigerator, but The TCAF volunteers did a great job of helping us out any which way they could, and made a determined-borderline-obsessive effort at directing the flow of traffic to and from the room which I appreciated. It was fun being neighbors with Vancouver’s Ed Brisson of New Reliable Press, Jason Turner and Jeff Ellis of Cloudscape Comics. What was fun was that Annie and I bumped into Jeff at the Real Thailand restaurant on Bathurst the next evening. We had dinner together and had a nice discussion about Vancouver, the Olympics, web comics, and issues of sending books through U.S/Canadian customs. He made a great point that we as small press people should work together to make moving our books through our borders a lot more efficient, cheaper and easier.

I also got the great pleasure to meet Anne Koyama of Koyama Press, who is an inspiration. She is the publisher of Michael DeForge’s comics series “Lose” which won a Doug Wright award that weekend. She really seems to nurture the artists she works with and publishes, and was really upbeat the entire weekend. I hope to see her at this year’s APE. 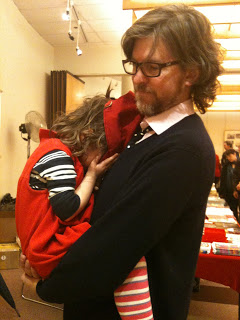 When not slacking off at the Drawn and Quarterly booth, Tom Devlin visited the table with Gigi and Woody! They are the cutest, right? Tom made sure to remind me that I was neglecting my son, especially during Mother’s Day. You’re the best, Tom!

The one thing that made my day was when Woody waved at me later from across the room. Don’t you love when kids do that? When you wave at them and then they decide minutes, maybe an hour later to wave back on their own terms? I am in love with Woody and Gigi, seriously.

Saturday night, Annie and I went to a pub so that I could see the Pens game. I mean, we’re in hockey country, right?!? You HAVE to! Most of the patrons were rooting for the Habs, which is understandable, although I had a conversation with a fellow who just visited Pittsburgh days before. After the game (the Pens won), a rugby team took over the joint and sang “standards” from the digital jukebox like “I Think We’re Alone Now” (Tiffany’s version) and selections from Meatloaf. One of them had a Pitt Panthers cap on. ?!? Good times!

Oh, and Saturday, we got went over to Bathurst for some spicy Korean food to warm us from the lake-effect chill. Of course, we went inside Honest Ed’s just to say we did and also to get some packing tape.

Sunday morning, a nice breakfast at a cafe on Cumberland. Then at the show, the crowds were not as crazy in the Publishers Pavillion. We were thinking that it was because of Mother’s Day, but when I got a chance to take a break outside, the main floor was still as packed as it was Saturday. My biggest thrill was talking to Chester Brown, finally. I forgot, with all the craziness, that one of the reasons I wanted to go to TCAF was to meet him. His book “I Never Liked You” was one of the first books that inspired me to do my own mini-comic. Hopefully, if all goes well next year, you might hear him on an episode of The Comix Claptrap.

Overall TCAF was a fun and interesting experience. It was nice to see work by Canadian and French cartoonists. It seemed like a lot of people felt a real comics communal atmosphere which I guess I take for granted since I get a chance to go to shows of a similar nature like Stumptown in Portland or APE in San Francisco. Many thanks to Chris Butcher for inviting me to represent Sparkplug. Also thanks to cartoonist MK Reed and Greg Means, my publisher for their help and support during the show. And of course, Annie, my travel buddy! So, that was my Sort Of East Coast Whirlwind Tour experience! Had so much fun!

So glad to be back to with my guys again! I was missing them a lot and my only wish was that were traveling with me! Perhaps, we’ll do it, maybe someday when I am not afraid to fly with a toddler sitting next to me.